We’ve all seen the breaking news headlines. It’s yet another leader who’s crashed and burned with a financial scandal, an affair, or a struggle with addiction.

The leader’s family is wrecked. The organization blows up. Millions of dollars are lost in the brand’s tarnished reputation. Everything falls to pieces.

And these scandals happen so frequently to our political and corporate leaders that we tend to assume they’re the inevitable result of pressure or some character flaw.

But as today’s podcast guest explains, it can all be prevented.

Stephen Mansfield specializes in helping companies get back on track after their leaders falter. And over the years, he’s seen the same risk factors for leadership crashes crop up again and again. Today, he’s sharing these 10 warning signs of a leadership crash with us so we can protect our families, our businesses, and ourselves.

Let me just add: the items on this list may surprise you. These aren’t the kind of warning signs you might immediately think of. But when you hear them, they make complete sense. And they’re powerful. I’m convinced what Stephen shares here will save some lives.

Even if you feel like you’re on sure footing today, take this list to heart and share it with your colleagues. It can help you stay healthy and well balanced as you grow in leadership.

Ever made a commitment with your spouse that you’d only stay at a job for, say, 12 months — only to find, two years later, you still haven’t moved on?

Then you know what it’s like to be “out of season.”

It’s the first sign of a leadership crash, which Stephen describes as that feeling where “you know that you’re not where you’re supposed to be.”

In those moments, Stephen says, we must take a hard but necessary step: “Stop whatever you’re doing. Do whatever you have to do to stop the daily pushing on something that’s out of season.”

To go back to the example of overstaying your commitment at a job: Go to your spouse and say, “I know I said I’d stay 12 months and I realize it’s been two years. I know it needs to end. Let’s talk about it.” It’s going to feel scary. But if you’re out of season now, that means there’s different, better situation out there where you’ll be “in season.”

The second sign of a leadership crash is isolating yourself.

Now, we’re not talking about pursuing solitude. All my fellow introverts know there’s nothing wrong with taking a little time to yourself to recharge.

The idea of isolation goes deeper. When you isolate yourself, you’re continually cutting yourself off from feedback from those who know and love you.

When you isolate yourself, you’re continually cutting yourself off from feedback from those who know and love you.

It’s a natural inclination when we’re hiding something, because we think people will figure out whatever our dirty secret is.

What do you do? In Stephen’s words, you “find your best friend, sit them down, and say, ‘I’ve screwed up.’”

Better yet, surround yourself with people who aren’t afraid to stand up to you in the first place. These are the kind of people who can call you on your bull and challenge you when they see you trying to distance yourself.

If you’re scanning this post, stop and read this point. As Stephen told me, for most leaders who have a crisis, “this is the defining issue almost more than anything on this list.”

Every single one of us is vulnerable to bitterness. Nobody gets through life without a trauma of some kind. A romantic relationship that went sour. A parent who walked out. A cruel bully back in grade school.

“The question,” Stephen says, “is whether we surrender our souls to it.”

Part of Stephen’s work in these leadership crashes is to figure out what happened. And in every scenario, he sees a leader who held onto some kind of bitterness or wound, allowing it to cycle and re-cycle in his or her soul.

Until we resolve those issues of bitterness and recognize when they rear their ugly heads, they can creep in and fuel our actions.

There’s an interesting tie-in here with … surprise, surprise … story! One of the things that makes a good villain in literature is an aspect of victimhood. Something terrible has happened to this character. They’ve not resolved it, and they’re raging against the world. The hero also has a victim aspect, but they have resolved it. (Compare Harry Potter and Tom Riddle/Voldemort — both dealing with the wound of being orphaned — but Harry deals with it by surrounding himself with love while Voldemort soothes his pain by seeking destructive power.)

And that’s the difference, both in story and in our own lives. We’ve got to resolve those issues of bitterness or else they’ll come back and leave us vulnerable in ways we may not expect.

When we evade small moments of confrontation, we set ourselves up for a large-scale disaster.

“If we don’t have small healthy confrontations and explosions,” Stephen explains, “we’re going to have the great big, huge ones that blow up our lives.”

It’s a quick correction you give your assistant. It’s a small word of advice to your child. It’s a short conversation with your spouse about something amiss you noticed.

These small, regular confrontations help us fine tune what’s going on in our relationships. Without them, our frustrations mount and we end up with a big explosion.

Some small examples from Stephen include:

“Hey, that blog post doesn’t make any sense.”
“Hey, you’re being silly.”
“You were a little harsh the other day in that meeting. What’s going on?”

As a leader, it’s your job to invite this kind of feedback. Ask people to confront you. In fact, Stephen even writes it into the job descriptions at his company.

One of the first questions Stephen asks when he consults with an organization is “What’s the recent history with the leader’s friendships?”

In almost every circumstance where there’s a leadership crisis, there’s some kind of dysfunction or fall-out with a leader’s closest friendships.

It goes right along with choosing isolation and evading confrontation, doesn’t it? To protect yourself from a crash, prioritize your friendships.

“Most people,” according to Stephen, “are living in overly scripted lives.”

We spend our days barreling through our to-do lists, working out, finishing projects, helping out with the kids’ homework, getting the oil changed in the car, whatever — and we simply forget to have fun.

If you’ve found that your favorite trips, hobbies, and diversions have faded away, pay attention to that.

High achievers tend to trivialize fun because they feel like it’s expendable on a list full of other seemingly more pressing tasks.

High achievers tend to trivialize fun because they feel like it’s expendable on a list full of other seemingly more pressing tasks. But fun is critical to our happiness because, according to Stephen, “fun is where you find yourself again. It’s where the creative energy, the imagination, the fun and the frolic comes from. It’s where rest for a certain part of your soul happens.”

So fight for the fun in your life. Embrace it as a healthy part of life and leadership.

These days, everybody self-brands and self-projects an image. We carefully stage our Instagram posts and set up Google alerts for our names. It’s crazy.

In leadership, sometimes we build or gain a “brand” that’s larger than reality. And living under the pressure of that false branding is exhausting.

As a result, Stephen points out, “a lot of these crashes are about people blowing up a world they don’t want to live in anymore.”

After awhile, you feel like you can’t confess that artificial image. Nor can you live up to it. So you destroy it — with an affair or too many drinks or embezzlement or whatever the crisis is. It may be subconscious, but it’s the only way out that some people can see.

I just have to quote Stephen here because I think so many of us can relate to this one, especially if we lead a business or division:

In other words, you look at your day and can’t see the larger, strategic purpose behind it.

For me, it helps to understand the story you’re living. Why are you the good guy? How is your life a subplot of a larger story? Clear off those numbing appointments that don’t further that story and help you connect with your gifts and purpose.

For more about this, listen to the fantastic episode with Greg McKeown about pursuing what’s essential in life.

This is one of those “soft signs” you might not think of at first. But it’s so obvious once you hear it.

One sign of a crisis is building a “third world” outside of your home and your office. For many, it’s a bar. An apartment in the city. A casino. Stephen says it’s the place we’ve created “so we can avoid the discomfort and the unhappiness of home and work.”

The truth is, success changes you. And often times, leaders let themselves be changed without bringing their spouses and families along for the ride. As a result, they feel misunderstood at home, and that’s what drives them to create this third world where they can indulge their vices or simply be someone else.

If you’re married, Stephen’s advice for you is to “stay in a position where you value the input of [your] spouse.” When your spouse understands your world, you’re much less vulnerable to go build another one.

What does it mean to “lose the poetry?”

Stephen recounts a movie called Broadcast News in which the main character, who’s a news producer, gets up and sees if the day’s news can still make her cry. One morning, it doesn’t. That’s losing the poetry.

Whatever your role, you got into it for a reason. You believed in something. You were passionate about a subject. You wanted to improve people’s lives. When you lose sight of that reason, when you lose the heart of what you’re doing, that’s losing the poetry. And when that happens, you’re inviting destruction to come in instead.

What captured your heart in the first place? What lit you up and propelled you to want to achieve success in your field? Stephen says, quite simply, “Hang onto that. Keep it central.”

So how can we build sustainable lives as leaders and protect ourselves from these kinds of crashes? Here’s Stephen’s advice:

Remember this stuff isn’t just important so that you don’t have a miserable life experience. It’s important because people are watching your story, and they’re learning from it. This episode is a great reminder and challenge to protect it. 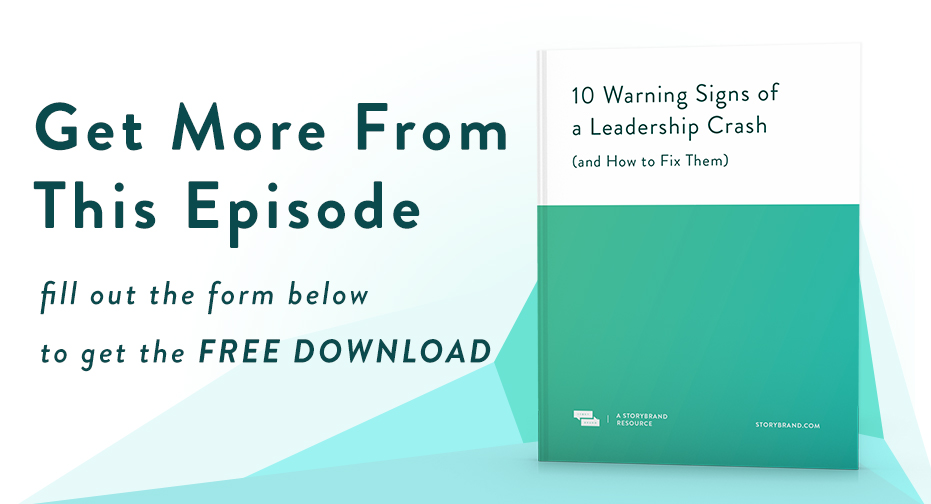