In the early 1990s, a guy from South Africa came to the United States with $100 in his pocket. He proceeded to revitalize America’s lagging aerospace industry and dramatically grow the market for electric cars.

You probably already know who I’m talking about, don’t you?

As the founder and CEO of both SpaceX and Tesla (among other ventures), he is arguably the world’s most visionary entrepreneur.

And on the podcast this week, I’m talking with Ashlee Vance, the man who wrote Musk’s definitive (and bestselling) biography.

As entrepreneurs ourselves, what can we learn from a pioneering leader like Elon Musk?

Listen to this interview for an inside look at Musk’s life and discover the big takeaways we can use to build our businesses, even if we’re NOT building rockets.

Ashlee Vance sat down several times with Elon Musk in order to write this biography.

At one point, they had a conversation in which Musk felt the tension of wanting a girlfriend while also not having any time. He said, “I think the time allocated to the business and the kids is going fine. I would like to allocate more time to dating, though. I need to find a girlfriend, that’s why I need to carve out just a little more time. I think maybe even another 5 to 10. How much time does a woman want a week? Maybe 10 hours? That’s kind of the minimum, right? I don’t know.”

“He is,” as Ashlee told me, “meticulous about his time.”

Every successful entrepreneur I’ve ever met is disciplined with his or her time and firmly grasps how precious it is.

There will always be more ideas, more money, more people to hire, and more problems to solve.

But time is finite, so Ashlee points out that Musk tracks his time to the minute with a spreadsheet. This way, he can analyze how his time is being spent among all his various ventures and in his personal life.

Every successful entrepreneur I’ve ever met is disciplined with his or her time and firmly grasps how precious it is. In fact, it’s a little dizzying to think that Elon Musk does what he does each week in the same 168 hours you and I each get.

For us, the big idea is the same: be in control of how you spend your time. You may not need a spreadsheet. But you may need to develop the discipline of saying no, change how you use your smartphone, or learn how to stay focused.

Rally your team with an “insurgent” mission

Chances are, you don’t think about Mars a lot. Or at all. It’s a planet, so what?

But for Elon Musk, Mars is an all-consuming mission. He wants to see colonies thrive there. He’s even on record saying it’s the place he wants to die (“just not on impact,” he jokingly added).

And he’s built the team at SpaceX around that mission. “These thousands of [employees] want to get to Mars as badly as Elon does,” explains Ashlee.

And Musk uses that mission to attract the most innovative and talented thinkers. “Aerospace had become a boring industry that hadn’t changed in decades,” Ashlee explains. Your options as a young aerospace engineer are to either “go get a job at Boeing and bide your time and do a couple interesting things, or you can go to SpaceX and you can be on this small team that’s trying to get to Mars.”

Find a clear, simple mission that elevates your day-to-day work and make sure your employees understand what you’re truly out to do.

It doesn’t mean you have to colonize Mars. But what if the employees at your landscape company saw their efforts not merely as yard work but as helping families spend more time together outside because their yard is beautiful? Find a clear, simple mission that elevates your day-to-day work and make sure your employees understand what you’re truly out to do.

When Elon Musk started SpaceX, he had decades of knowledge to draw from, thanks to NASA and the international space community.

But he didn’t want that to be the starting point. In fact, he saw it as a liability. He told his engineers to “start with a clean sheet of paper.” He didn’t want his team to assume the way things have been done in the past is the right way to do them going forward.

By taking away the baggage and assumptions, he cleared the way for incredible innovation. The book is full of examples, but one that Ashlee mentions in the podcast is staggering:

Whatever business you’re in, you’re making assumptions based on what you’ve done in the past.

In the early days of SpaceX, space grade radios cost $200,000 each. Musk, figuring that computers had come along way in five decades, wondered if the whole “space grade” radio was still necessary. They tested. It wasn’t. So now SpaceX builds its own radios for about $5,000 a pop.

Whatever business you’re in, you’re making assumptions based on what you’ve done in the past. It could be in your processes, your suppliers, your messaging — anywhere. Those assumptions can easily become a liability. They keep us from achieving the kind of game-changing “space radio” breakthroughs that fuel significant growth.

Understand your role in the big picture

Your friend shows up for dinner. Like a normal person, you ask how it’s going. Most of us respond with a bit of small talk.

Not Musk. When he arrives to dinner, Ashlee asks him how it’s going. The first thing out of Musk’s mouth is, “I am afraid that Larry Page is creating an artificial intelligence that will destroy mankind.”

Musk is, to be sure, intensely focused on the big picture.

Ashlee writes in his book, “He’s less of a CEO chasing riches than a general marshaling troops to secure victory. Where [Facebook CEO] Mark Zuckerberg wants to help you share baby photos, Musk wants to, well, save the human race from self-imposed or accidental annihilation.”

That’s how he sees his role in the story of humanity, and he’s passionate about it. According to Ashlee, it brought him to tears in an interview. Not talking about his kids or his own difficult childhood. The tears came when Musk started talking about humanity as a species.

Knowing the role you play in a larger story gives you context and motivation to keep going when you face challenges running your business.

Again, the scale of our work is different, but knowing the role you play in a larger story gives you context and motivation to keep going when you face challenges running your business. It keeps you tethered to a purpose and gives you clarity for your decisions. Losing sight of that passion and purpose, as Stephen Mansfield told us in last week’s podcast, is one of the signs of a leadership crash. So while it may not be the first thing out of your mouth when someone asks you how you’re doing, keep your passion front and center.

The scope and scale of Musk’s life is epic. But when you look at what he’s doing in business and how he’s doing it, it’s impossible not to be inspired — especially given the winsome way that Ashlee Vance covers it in his biography. As a business leader, I learned a lot from this interview and from the book, and I know you will too. 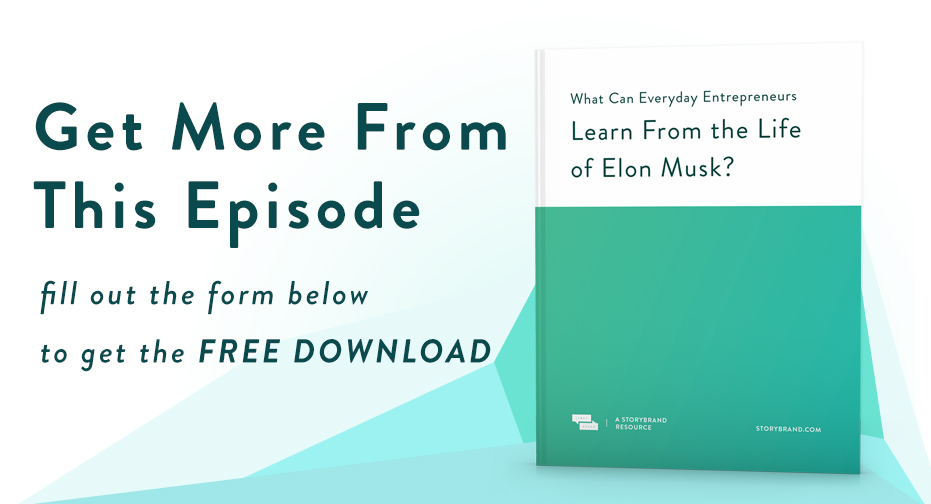