What if there were a roadmap that showed you all the major milestones your business was going to hit as it grows? Wouldn’t it be great to know what’s coming next and how to navigate well?

Actually, that framework exists, and we’re going to explore it in depth on this week’s episode of the Building a StoryBrand podcast. I sat down with David McKeown of PredictableSuccess.com. He and his father Les have developed this framework over decades, and they’ve seen it prove out in countless companies, regardless of their size or industry.

When you understand these seven stages, you’ll understand how to strike a perfect balance between innovation and processes. And when that happens, the success of your business becomes a lot more predictable.

This is essential listening if you’re leading a young or startup business. It’s going to help you anticipate what’s next and make the success of your business more predictable.

If you dread payroll every two weeks, you’re probably in the “Early Struggle” phase of growth.

In David’s words, this is “all about a pursuit for a profitable, sustainable market.” Is your product viable? Does it work? Can you finance it?

This is usually the reality for a couple of years. According to David, only about 20% of organizations survive this phase.

The pressure can feel overwhelming. David said it feels like “a lot like waking up every morning and finding the sharpest corner in your room and just banging your head relentlessly against it.”

If you’re in this stage, you can relate — maybe a little too well.

In the second stage, simply called “Fun,” there’s a little more money in the bank at the end of the month than there was at the beginning. You’ve figured out your product or service, and now, as David puts it, “fun is all about mining the profitable, sustainable market.”

A key relationship drives this success, and it happens between what David calls the “visionary” and the “operator.”

The founder of the company is typically a “visionary” of sorts — creative, charismatic, and keen to risk and dream big. Those are the powerful qualities that get a company through the Early Struggle phase.

But these visionaries often find it hard to dig in and focus on the details, typically because they’re drawn to the next shiny object.

That’s why most visionaries hire “the MacGyver of the business,” which David calls an “operator.” He explains that these “are just folks that get stuff done. They go through walls to see the visionary’s vision come to life.”

When we recorded this episode, my Chief Operations Officer Tim Schurrer and I exchanged a knowing laugh, totally seeing ourselves in this relationship. I’m going to start calling him MacGyver.

Part of what makes the Fun stage so fun is that everything is relatively simple. As a visionary and an operator, you can say “yes” to every idea and implement it quickly.

But over time, your business gets more complex.

You drop the ball a bit more. Orders fall through. Quality suffers. Your teams aren’t aligned. And that’s when you know you’ve hit the “Whitewater” phase — when you’ve got “a systemic issue with complexity,” as David puts it.

All these mistakes and poor communication cost you money, so all that great profitability you were enjoying in the Fun stage has diminished a bit.

Businesses that get through this do it with the help of what David calls a “processor.”

This is a third leadership style, characterized by someone you hire who can bring “repeatability and scalability to the organization,” David said. “At a senior leadership level, it’s about adopting the mindset that says, ‘In how we make decisions, we need to be more processed.’”

In the Fun stage, you make decisions quickly. But the business has to evolve on this point. As David says:

If you’re in Whitewater (and we are, here at StoryBrand) you can expect to get through it in about two to four years.

This fourth stage, “Predictable Success,” is the goal you’re trying to both hit and stay at.

David defines it as “a balance between the the creativity that grew the business in the early days, and the systems and processes that allow for repeatability and scalability.”

You’ve figured out your processes without losing sight of the vision, and now you know you’ve got everything in place to succeed.

David points out this stage has nothing to do with your company’s size. You can be a plumbing company with five employees or a Fortune 500 company and still achieve this stage.

If you’re a visionary and you want to keep your company in this stage, here are the things you need to do.

First, stay plugged into the company. David’s advice? “Visionaries need to learn to be a peer and say, ‘I’m going to grind through the details with you.’”

Second, over-communicate your vision. You don’t want the vision of the company to be solely locked up in you as a person. That means you’ve got to mentor and coach your leaders and instill the vision in them. As David says, “Your sole goal as a visionary leader in Predictable Success is to make sure that you start to institutionalize your vision into the organization.”

This gives people passion, vision, and direction. We all want to know why we show up for work. And it’s up to the visionary to communicate this. Over and over and over. You’ll feel like you’ve said it too many times, but the truth is, it’s so easy to forget. You’ve got to keep banging that drum.

Hopefully everybody reading and listening will reach and stay at Predictable Success. But what happens if you don’t?

That’s when you hit the “Treadmill” stage. It’s the polar opposite of Whitewater.

As David explains it: “In Whitewater, we’re under-processed for the first time in our existence for the need of the business. In Treadmill, we’re over-processed. We’re a little bureaucratic. We’re a little arthritic. Form becomes more important than function. Completing a checklist becomes more important than what the checklist is supposed to enforce.”

You’ve essentially overcorrected with your processes, and all the creativity and vision have suffered as a result. Jobs are just a matter of following processes. Think of United Airlines, and you’ve got the idea.

But this bureaucracy is not so entrenched that you can’t change it. If you’re leading an organization that’s hit the Treadmill stage, David’s advice is to dramatically change your hiring process: “Hire people that have small amounts of vision in them, that are going to bring some new, innovative ideas and solutions.”

Sometimes those new ideas are all it takes to restore that ideal balance between processes and innovation. That’s the silver lining in the Treadmill phase. You can see it, diagnose it, and address it.

Domino’s is a great example of a company that was over-processed (literally, in reference to their food) and struggling. Their new CEO, Patrick Doyle, turned it around with fresh vision, increasing shareholder value by 113%.

This next stage, “The Big Rut,” is just like Treadmill, but in this case, the bureaucracy has been entrenched and accepted.

This is the DMV. And you hate going there because of it. Organizations in this stage don’t really care about customers. The mentality here, as David puts it, is: “We’re over-processed, but nobody really cares. Everybody’s fine with it, apart from the people that have to deal with it.”

The bad news? It’s inescapable. You’re heading toward the next phase. “That’s the main reason why, when you get into The Big Rut, you can’t get out,” David explains, “because the infrastructure’s just so deep-seated that one individual can’t do that. Even in those organizations where they say, ‘Hey, let’s bring another visionary in here to try and rescue this,’ the body rejects the organ. It just gets chewed up and spat out because there’s just this overwhelming infrastructure.”

This is the bitter end, “The Death Rattle” of the company.

The visionary is long gone. The operator has left, too.

Now all that’s left are processors who are there, David quips somewhat darkly, “to make sure we go bankrupt on time.”

There’s no coming back from this, David says. The business in its recognizable form is gone, and it’s just a matter of liquidating everything.

(Full disclosure: I have a delusional fantasy that Sears will hire StoryBrand and we’ll turn the store around in a year. Sears, if you’re reading this, call me!)

Wherever your business is in these stages, now you’ve got a roadmap to move through it. Maybe you see signs of Treadmill and want to avoid it. Or you’re like StoryBrand, and you want to chart the fastest route out of Whitewater and into Predictable Success.

Which of these stages do you identify with? Why? Leave a comment and share your big takeaways with me. 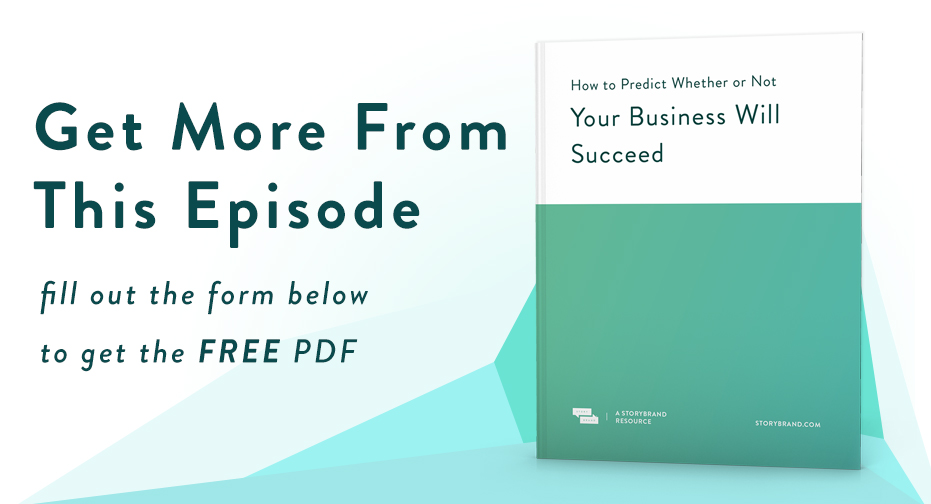 Answer a few short questions on our downloadable worksheet and apply this episode to your business. You’ll remember more of what you learned and have clarity for how to put it to use right away.