Here’s a picture of one of the bookshelves in my writing shed: You see the picture of Bob Goff. There’s a baseball with a personal inscription that means a lot to me. And there’s a book by sportscasting legend Ernie Johnson, Jr., who’s this week’s guest on the Building a StoryBrand podcast.

That’s my little collection of things that I can look over at and say, “That’s who I want to become.”

Ernie’s life is absolutely beautiful. It’s not perfect or easy. But his hard-won wisdom is a gift to business leaders like you and me. When I look at his life, I see that it’s possible to serve and sacrifice for others even while pursuing a career that matters deeply. I see that the unexpected upheavals in our lives are necessary to make us who we need to be.

I’ve teased out three life lessons for us to learn from this remarkable man. But if you really want a dose of inspiration that will stick with you, make it a priority this week to listen to the entire interview.

Story is an incredible tool for understanding ourselves. When we give structure to the events of our lives, we uncover clarity and beauty that we might otherwise have missed.

But living a great story doesn’t mean you have to live by a script.

That’s what Ernie discovered back in 1991, with the help of his wife Cheryl.

At that time, Ernie thought he had life figured out. Great job, amazing wife, two beautiful kids. He was ready to lock in and not deviate from it. As he puts it, “I was all about the next thing I had to do at work.”

But Cheryl’s focus was on making the world better. And one night when Ernie came home from work, Cheryl said, “You know what we need to do? We need to go to Romania and adopt a kid from an orphanage.”

And that’s exactly what they did. Cheryl went to Romania, where a woman at the orphanage brought them a three-year old boy and said, “Don’t take, boy is not good.”

Cheryl called Ernie and told him, “This kid is so much more than we can handle, but I don’t know if I can go the rest of my life wondering what happened to that blond-haired kid in the orphanage.”

Ernie’s response on the other end of the line was simple: “Bring him home.”

And so Michael joined their family. It was, in Ernie’s words, “the marking moment of the unscripted life.”

Not long after they brought Michael home, they realized he had muscular dystrophy, an incurable disease that causes the muscles to waste away.

Today, Michael is 28, defying life expectancy for his condition. Ernie told me:

He can do nothing on his own. We are responsible for everything, and that even goes down to the most common thing. It’s like you have an itch and you scratch it. He can’t do that. He looks at me sometimes and says, “Scratch a head, Dad” and you do it.

And I need that, Don, I need that. I need to put somebody else in front of me and reach out to him and not make it about me.

It’s not what are you gonna do for me today, it’s what can I do for you? And Michael created that whole mentality. And I’m forever in his debt for that.

It all started with that unscripted moment on the phone with Cheryl, and Ernie said he wouldn’t trade it for anything because of how it’s changed the way he sees the world. He made the decision to “embrace the unscripted,” in his words, “and as a result my life is as full as it has has ever been.”

That’s the life lesson for us in this. Yes, it’s a good thing to think of your life as a story and live with an intentional plan. But we can’t get so attached to that script that we lose sight of opportunities that we didn’t anticipate for ourselves. Those “off script” turning points often make us who we’re supposed to be.

Life Lesson #2: Your Actions are Your Message

Here’s one of the more remarkable things about Ernie that we, as business leaders, can really dig in and learn from.

On the one hand, he has an incredible devotion and work ethic. Most of us get that because we have it too.

For example, when Ernie was diagnosed with cancer, he didn’t miss a day of broadcasting work for NBA games, even when it meant appearing on TV feeling self-conscious because of his extremely swollen lymph nodes. That’s devotion.

But at the same time, his career absolutely doesn’t matter in comparison to his family.

Again, to illustrate: one year, his son’s high school graduation fell on the same day as Game 7 of the NBA Western Conference Finals. He was very clear to his production team: if the series goes to Game 7, he wouldn’t be calling that game.

In both of those cases, he says it’s all about “the message I was trying to get across.”

For his son, the message was: “Your graduation, this marking moment in your life, is much more important than Game 7 of the Western Conference Finals.”

In the case of his cancer, his message was, “I’m going to work because I don’t want anybody out there thinking that because you have cancer you’re gonna die.”

Only his actions could deliver those messages.

The lesson for us? Whether it’s at work or at home — or in trying to figure out the balance of the two — make choices that reflect the message you want to communicate to the people who are watching you.

Life Lesson #3: To Have an Extraordinary Life, Remember Other People

Ernie has won the John Wooden Keys to Life award. He has always been well respected among his peers as someone with integrity, faith, and an abiding commitment to others. A lot of us look at Ernie and say, This guy has figured out how to live a successful and meaningful life.

So what do we need to remember if we want the same kind of life?

He could have just dropped the mic and walked away from our interview at that point, but he explains:

“When we get so tied up in what we are doing, and we’re going at such breakneck speed, you miss those moments where you can impact somebody’s life.

“I want to serve. I want to be walking out the door, after having served [my son] Michael in the morning, and have my antenna up. So that I notice the people who need to have somebody to talk to.”

What does that mean for us? Just because you’re successful and your time has gotten extremely valuable, that doesn’t exempt you from keeping that servant mindset and finding ways to remember those around you. If Ernie can do it, so can we.

I am so grateful for Ernie Johnson and the way he lives. Maybe you’re realizing you’ve gotten a little caught up in yourself and you want to slow down and see other people. Maybe you’re going through a hard time and need some inspiration. In either case, don’t miss Ernie’s book Unscripted. He is the real deal. 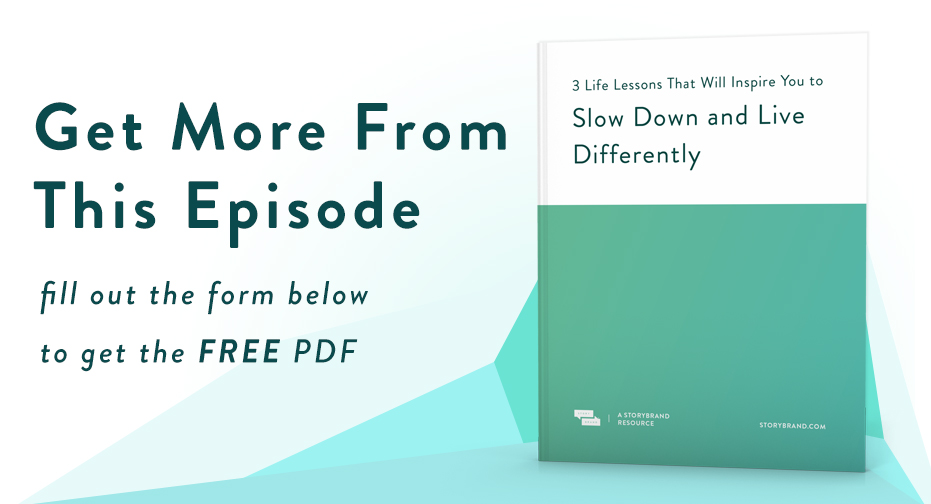